How is the Brightness of Light Determined? 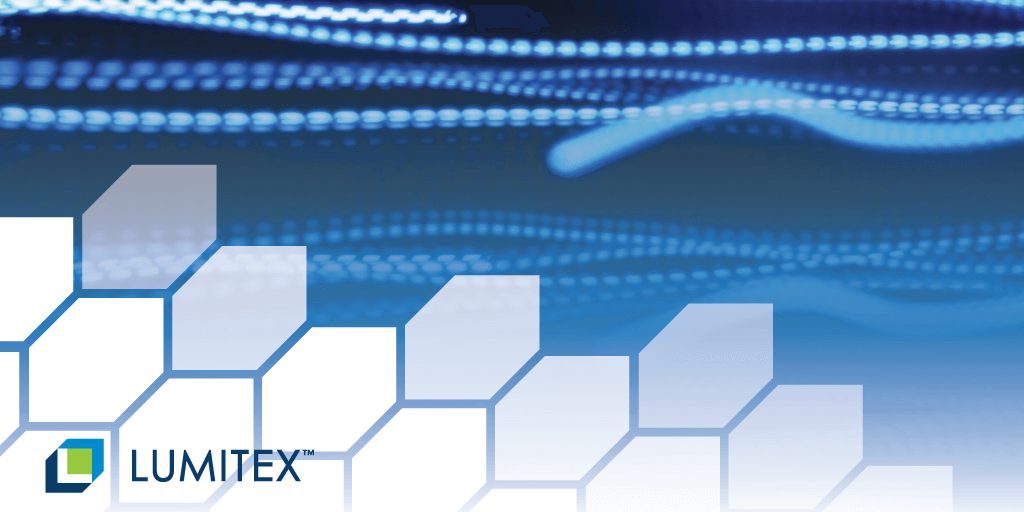 Brightness is an attribute of visual perception in which a source appears to be radiating or reflecting light.

There is often confusion around terms such as luminosity, magnitude, light intensity and how humans actually perceive light. It's important to understand the different terms and technology used in the illumination industry.

As a leading lighting solutions provider, Lumitex is asked frequently, "How bright does my product need to be and how is it determined?" 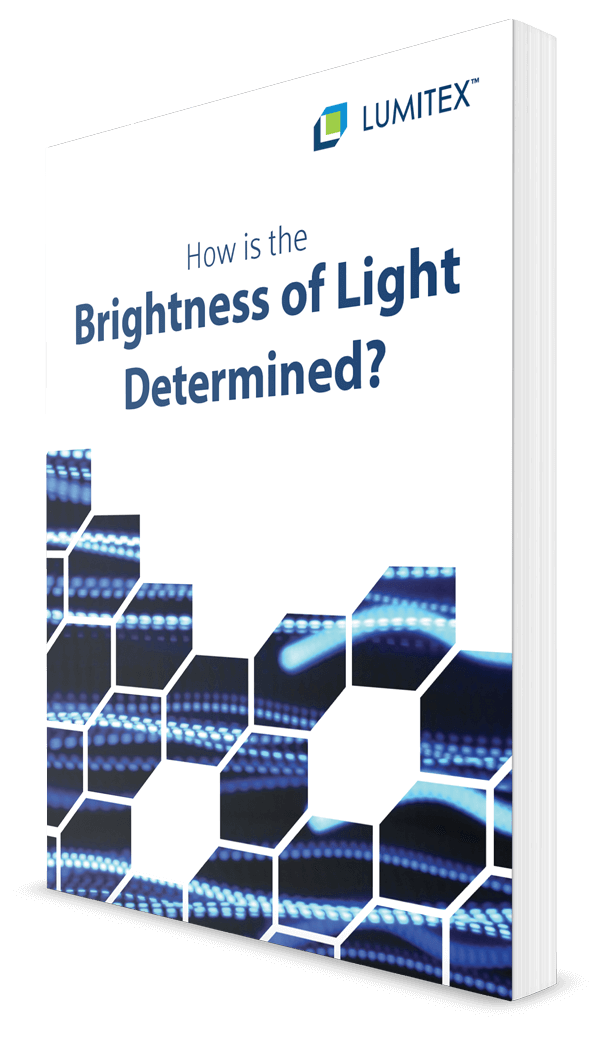 Want to learn more about the brightness of light? Get the free PDF

Light is the visible portion of a larger range of wavelengths known as the electromagnetic spectrum. 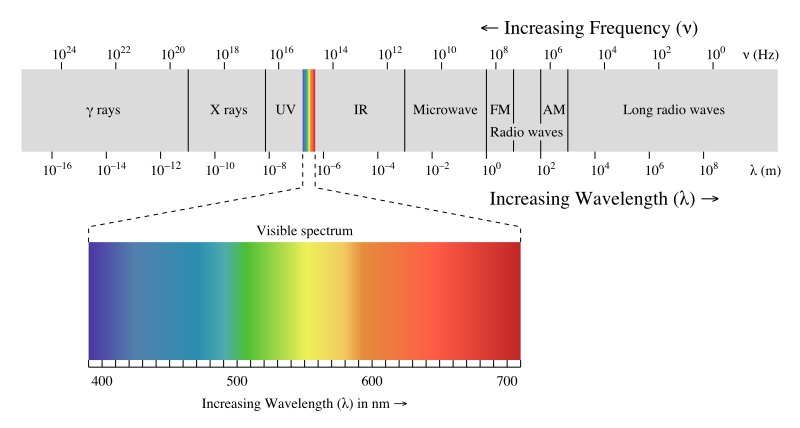 This spectrum ranges from Radio waves with building-sized wavelengths, to Gamma rays with subatomic wavelengths. The wavelengths approximately between a virus and a bacterium in size are known as visible light.

The visible spectrum of light is the section of the electromagnetic spectrum that is visible to the human eye, typically 400 nanometers to 700 nanometers.

Where Does Light Come From

Let's first define a few key terms to understand the question asked, "Where does light come from?":

1. Luminance, the original meaning of brightness, is the amount of light per solid angle coming from an area, such as the sky.

2. Apparent Magnitude, in astronomy, apparent magnitude (apparent brightness) equals how bright the star appears from earth. This depends on the location of the observer.

3. Luminosity of a star, is the amount of light it emits from its surface, or the total energy output per second of a star. [source]

The light that we see comes from distant stars; most prominently the Sun of our Solar System.

A radiating body like the sun emits a lot of energy [about 3.84 × 10^26 power], and the energy output per second is called luminosity [L]. As you travel further from a radiant source, the brightness decreases.

The variation in a star's brightness is a result of two components:

1. variations in its luminosity

2. variations in its distance

As light travels towards you, it is spreading out and covering a larger area. The concept is illustrated in the image below. 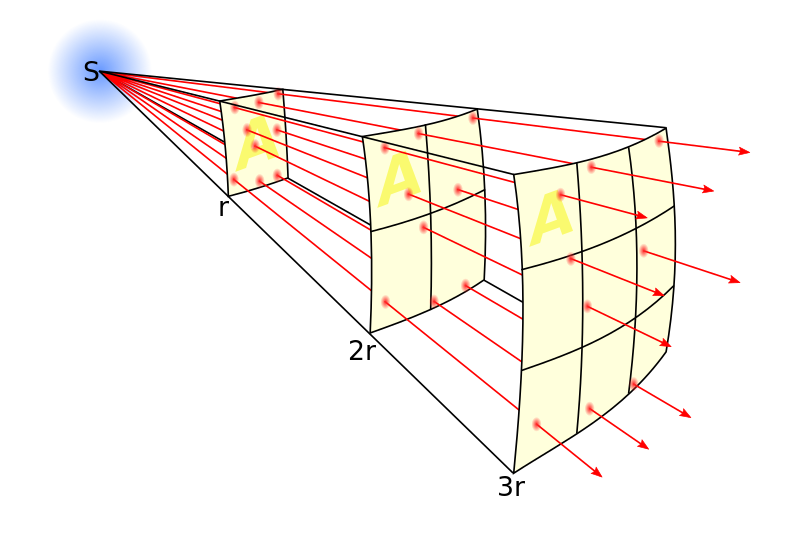 S represents an ideal source of electromagnetic radiation. A represents an arbitrary segment of the surface of a sphere of radius r.

How Do Humans Perceive Light

As human beings, we see light with our eyes. These special biological sensors have a lot of working parts.

The iris opens and closes in response to light, from about 2 mm at its smallest to 8 mm at its largest. It closes when there is a lot of light to protect the sensitive cells inside of the eye, and opens to allow more light in when there is less available.

Inside of our eyes are millions of tiny sensor cells called cones and rods. Cones perform best between bright moonlight and daylight conditions, while rods help to sense lower light levels.

Cones are color sensors. There are three types of color-sensitive cones, each with pigments that absorb a particular wavelength:

1. 445 nm, which is sensitive to short-wave blue light

The cones collect information and send signals to our brains to interpret the information. Because this is a biological process, there is a wide range of human diversity, and so color and light will be perceived differently by each person.

You may recall the social phenomenon that divided the internet as to whether the dress was white and gold or blue and black. The dress was perceived in different colors. There is a science behind why no one agreed on the color.

An explanation for the difference in color perspective was explained by Bevil Conway, a neuroscientist who studies color and vision at Wellesley College.

Here’s an excerpt of her reasoning...

In addition, as you can see in the image above, the cone peaks at 555 nanometers. This would indicate that under normal lighting conditions such as daylight, the eye would be the most sensitive to the yellowish-green color. The light at this wavelength produces the highest brightness when compared to light at the other wavelengths.

From the sun to automotive headlights to an LED single color indicator, light sources are all around us. Different types of lights affect the way our eyes view colors. In daylight, we tend to see blue and green most.

In this section, we compare common items such as billboards, headlights and smartphones to their respective "brightness" and its units of measurement.

First, let's give you a baseline from the Sun and Moon in terms of brightness.

The moon's surface reflects the light of the Sun. Its apparent magnitude is -12.7 (14 magnitudes fainter than the Sun).

“Brightness” here means, specifically, the amount of sunlight reflecting off the surface of the Moon. Its apparent magnitude is about 400,000 times smaller than the Sun’s, but the Moon’s exact brightness depends on its angle with respect to the Sun and Earth. And those angles follow a complex pattern that repeats roughly every 20 years.  [source: How Bright is the Moon, Really?]

To fully understand the concept of how the moon is 14x fainter than the Sun, but only half its actual apparent magnitude, we need to appreciate logarithmic scale.

WinMate, a global leader in developing advanced mobile technologies, compared different lighting conditions and its source. You can view the chart here.

Now let's look at some common objects you are faced with on a daily basis.

Sign brightness is related to how it interacts and/or contends with the Sun in a day. It would make sense if the brighter the display, the better it can compete with the Sun.

At night, the sign is competing instead with the Moon, and so it appears much brighter even when operating at the same intensity.

The LED industry measures outdoor digital billboards or sign intensity in candelas per square meter, which is also referred to as nits. Nits measure luminance, the density of light emitted.
"On a more technical level, a NIT is an amount of light output equal to one candela per square meter (cd/m2 - a standardized measurement of luminous intensity)." [source]
Billboard illumination could be considered a safety concern - too bright and it can act as impairment to motor vehicle operators.
According to Bill Platko, General Manager at Fairway Outdoor Advertising,

"LED’s have high efficiency components. The brightness of these lights, power and colors have come a long way. Power consumption has been significantly reduced and the resolution quality improved.
More importantly, most LED units are installed with light sensors that monitor the ambient light. The sensors will automatically adjust the brightness level of the LED unit based on the surrounding light conditions."

With evolving technology, many states in the U.S. are adopting lighting standards. The OAAA (Outdoor Advertising Association of America, Inc.) Code of Industry Principles agrees fully stating, "We are committed to ensuring that the ambient light conditions associated with standard-size digital billboards are monitored by a light-sensing device at all times."

Brightness regulations are an important aspect when implementing electronic signs.

Lumens are the standard measurement of light output in automotive headlights. A car headlight is around 700 lumens with a high-beam headlight at 1200 lumens.

Today there are choices of HID or LED. For headlights, it depends on the application and the desired effect.

According to Power Electronics, LED lighting is gradually penetrating the automotive industry.

"LED technology has allowed lighting to become a distinctive feature and enabled innovative functions like the glare-free adaptive high beam."

The article goes on to say, "Improved LED performance, lower power consumption, and flexible design were the first enablers. Then, cost reductions helped LED technology spread to all vehicle categories."

The image below displays how far the auto industry has grown in terms of lighting technology and functionality. 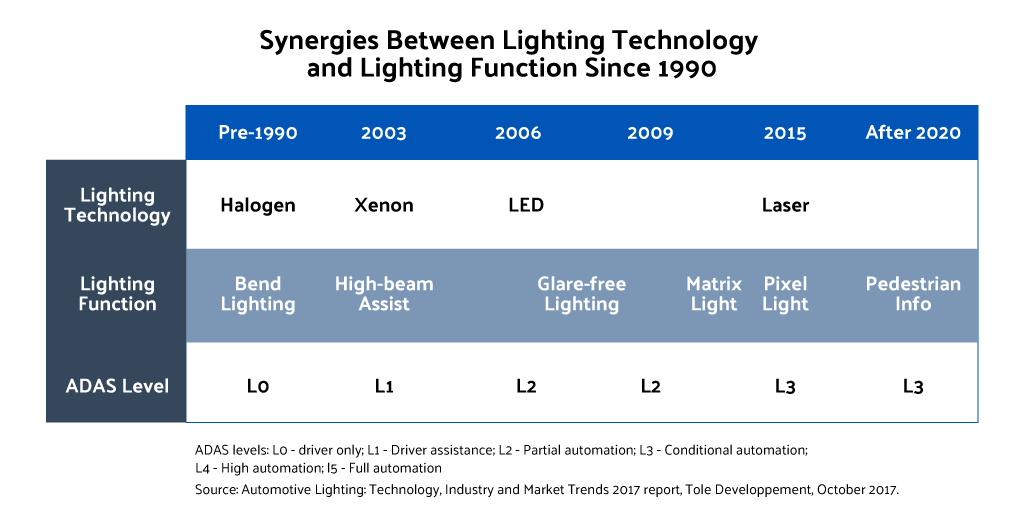 Tail lights are the red lights on the back of your car. The Federal Motor Vehicle Safety Standard 108 (FMVSS 108) governs headlight and tail light intensity ranges. The purpose of the standard is to reduce traffic accidents and deaths, by providing adequate illumination.

Luminance measurements are used for products such as automobile tail lights.

LED lights are a popular choice for them and last longer. Halogen lights are another choice. Xenon lights are the third selection for tail lights that are stronger and brighter with high intensity.

A technical writer and product consultant, Timothy Zahl, goes on to say tail lights equipped with LED lights boost the look of any car.

When shopping for a television today, you may hear the term Nits as well. More Nits equal more light output.

Think of it as a measurement of how much light your TV screen sends to your eyes within the area you are sitting. On average, typical televisions range from 500 to 1,000 nits.

The measurement of the amount of light the LCD monitor produces is given in nits or candelas per square meter (cd/m2).

"Typical brightness ratings range from 250 to 350 cd/m2 for monitors that perform general-purpose tasks. For displaying movies, a brighter luminance rating such as 500 cd/m2 is desirable." [source] "How Computer Monitors Work"

A flashlights brightness is typically indicated in lumens.

They vary from a classic Mini Maglite that peaks at around 15 lumens, to a typical LED headlamp that puts out 50 to 100 lumens. Larger flashlights can go as high as 4000 lumens.

Without a quality display, user experience falls short. Color reproduction and brightness is a want for most users.

Smartphones and tablets have extremely powerful lights. The screens glow so brightly that they can be viewed in daylight and nighttime.

Ferris Jabr, contributing writer for Scientific American, reinforced the reasoning for the brightness:

"By combining the new blue LEDs with older green and red ones or coating blue LEDs with chemicals that re-emit other wavelengths, technology manufacturers could generate full-spectrum white LED light for the first time.

Because LEDs are much more energy-efficient than their fluorescent predecessors, they soon became ubiquitous in TVs, computer screens, tablets and certain e-readers, infusing homes and offices with much brighter blue light than ever before."

Similar to computer displays, Nits are used to describe the brightness of smartphones.

The digital revolution has even made its way into appliances in the kitchen. For example, some oven displays can control the brightness on its control panel, and some have different contrast options.

One drawback to ovens and ranges with a digital display is that the display can start to dim over time. A few resolutions to this issue could be replacing capacitors on the electronic control board or replacing the entire control board.

The fact remains we are seeing more appliances with better lighting. The Nit is the unit of measurement that is used for light given off in digital displays such as visual appliances.

How to Measure Nits

LED light panels give a visual indication of a system status at a glance. Think of your car that has a check engine light that displays. It's a sign there is a malfunction.

How Bright Does my Product Need to be

Depending on which technology is right for you depends on the application, your business goals, and your budget.

To answer the question, "How Bright Does my Product Need to be?"

There are too many variables for a blanket statement. If you're looking at LCD versus LED alone, you have to consider the resolution, pixels, viewing distance and ambient light for starters. The main objectives and budget also come to play.

Understanding your application and technologies available will drive your final decision.

Need light in a unique configuration?

Kevin Friedman is a Project Engineer at Lumitex, Inc. with broad experience in LEDs, circuit boards, and optical systems. He develops products and processes to meet the ever-growing demand to add innovative lighting to products.